A cartoon in today’s Sunday Times books section shows a bookseller drowning under an avalanche of Titanic books. In fact, there are 78 books about the Titanic scheduled for publication in the UK this year, up from 68 last year and just 10 the year before. This ‘avalanche’ extends to virtually every other form of media, with James Cameron’s 3D feature film, Julian Fellowes’ TV mini-series, loads of TV documentaries, operas, theatre productions, concerts, new museums … see Greg Ward’s calendar of events at http://blogtanic.wordpress.com/events-calendar-2/. 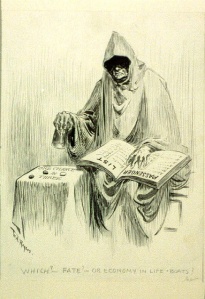 I have written two Titanic books myself, one published last year and one coming out in 10 days. Have I jumped on a bandwagon, along with all these other writers, musicians and artists? The term has an implication of opportunism, a hint that we might not have chosen this topic were we not pretty sure that it would be popular – and I can’t speak for anyone else but personally but I would have to hold my hands up to this. I earn a living from writing and have to choose subjects people want to read about or my income will dry up. Publishers are on a regular look-out for anniversaries in order to hitch their wagon to publicity generated by other media, and my non-fiction Titanic book was the result of a commission from a far-sighted publisher back in 2009.

However, I don’t think anyone who has a Titanic product coming out around this time has created it without caring deeply about what happened in the north Atlantic on the night of the 14th/15th of April. You can’t immerse yourself in the subject without becoming emotionally involved. I also think most of us were already Titanoraks and the centenary just brought an opportunity to get our work out there. I’ve been passionate about the Titanic story since I was a teenager. Both my grandfathers worked in shipbuilding on the River Clyde and I grew up knowing about the great luxury liner that sank on its maiden voyage. The story really got under my skin when I saw the film A Night to Remember, and I think I’ve been waiting for a chance to write about it since then.

Of course, it’s important to remember that this is the centenary of a tragedy in which 1,500 people died, and many of them are still remembered by living relatives. There is a line that shouldn’t be crossed, so that we are commemorating events but without being disrespectful to the dead. None of the books and other media I’ve come across so far have been in bad taste, although there are forums where some argue that the costume cruises to the site of the sinking are a step too far.

The Titanic is part of our cultural memory. Before April 1912, the word “titanic” meant “colossal, strong, all-powerful”, after the Greek gods called Titans. Now it has become synonymous with catastrophic disaster, one that could so easily have been avoided. It is a subject that still creates controversy and makes us analyse our own moral values and, as such, a prime arena for artists working in all media. I welcome the diversity of artistic interpretations that is emerging and personally am going to take in as many of them
as I can.